My very first trip to France was in July 1990.  There were five of us.  We planned a month long trip spending most of our time in France.  A week in Paris, then visiting the Loire Valley and Chablis.  Next was a short visit to Brugge, Belgium then on to Amsterdam for several days and ending at The Hague in the Netherlands.

As it turned out, we would be in Paris for Bastille Day and anticipated being there for the holiday and a look into how the French celebrate it.

That morning we got up before dawn with the plan to get to the parade route early for a prime spot along the Avenue des Champs Elysees. 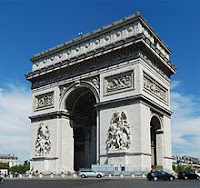 The Arc des Triomphe is the symbol of  the soldiers who fought and died for France during the Revolution and Napoleonic wars.
The names of all the victories are inscribed on the inner and outer surfaces.  Beneath its vault, centrally located directly under the arc is the Tomb of the Unknown Soldier of World War I.
The massive Arc is located in the center of the street where the Avenue des Champs Elysees begins with traffic circling around it to get to one of the eight streets that branch off from it.

That's where the parade starts then travels down the most famous street in the world, Avenue des Champs Elysees.  Where the most notable and expensive shops share space and the street is lined with chestnut trees. This famous avenue will lead you not only to the Arc des Triomphe but in the other direction to the Grand and Petit Palais, Place du Concorde, Tuillerie Gardens and the Louvre.

The sidewalks are wide and the trees are lit with tiny white lights that makes the street sparkle and shine.

But today, as we approached the area, we were greeting with a sudden halt as it seems many others had made the same plans we did.  There was a large mass of people not moving but as we tried to wade through them to get closer to the street for a better view, it became abundantly clear by their glaring faces that we were actually trying to cut in front of the crowds who had come before us and were not relinquishing their prized spots.

We were so far back that we couldn't even see the street or have any idea how close we were to it.  It was an unbelievable site of thousands of people tightly gathered for the big parade that was still hours away.  We discussed whether it was worth staying since we could see absolutely nothing but the French citizens ... unlike in America where we bring our lawn chairs, coolers, umbrellas, et al, just brought themselves so it was a solid mass of people.  Then we began to notice some were holding these funny-looking elongated square contraptions made out of paper.  We wondered what the heck they were and what were they used for.  So I decided to watch someone to see what they would do with it.  Eventually they took this long, square paper thing and lifted up and peered under it like a submarine periscope.  I alerted my companions and we watched in curious wonder.  Was it actually a type of periscope?  Someone near me had one and I tried to get a little closer to see how it worked.  Soon after, there was some brave person squeezing through the throngs, selling these crazy periscopes for just a few francs (this was pre euros).  We bought a couple to share and eager experience its use took turns trying it out.  Somehow it was ingeniously designed to actually see above the crowds and into the distance where the street was.  If I remember correctly, there was some kind of a magnified reflective mirror inside that allowed us to view the parade route.  Yes, we were going to be able to see the parade after all.
After the parade, which was one of the longest I've ever seen, we returned to the hotel to freshen up from the long day in the hot sun and tight proximity to other hot bodies.  We would watch the fireworks at the Eiffel Tower then afterwards listen to the free concert with Jean Michel Jarre, if my memory serves me correctly.

Since we were staying near Notre Dame in the Latin Quarter, we opted to take the metro to the Eiffel Tower.  Once again, great minds thought alike.  At first the metro was busy but nothing crazy.  We boarded one of the cars and off we went, smiling, in a celebrating mood.  We were in Paris during their biggest holiday, how fantastic was that!  With each stop, the cars became more crowded.  Then to the point that we could no longer move.  So the five of us made sure we were squished together so no one would get lost.  By the next stop, it would be impossible for another body to get on and many of us hoped some would get off.  But instead, the platform was jammed with people waiting to get on and no one was getting off.  It was becoming hard to breath and we were feeling a bit panicky because people were annoyed all around us.  I'm not sure if the metro stopped running or if it just got too scary for us as the crowds got more and more agitated but we decided to get off the metro and walk.  It was not easy to get out of the car and through the crowed platform to the exits but when we finally did, we had missed the fireworks but were infinitely happy to be able to breathe fresh air and open space.  We didn't even bother to get closer to the Eiffel Tower and the concert but instead, tried to get our bearings and see how to find our way back to our hotel.  On the way, everyone everywhere in all the restaurants, bars and clubs (and there are lots of them on just about every street, were playing music loud, laughing, dancing and spilling out into the streets.  The French really know how to throw a party.  Overwhelmed with the days events, we quietly found our way back to our room.  That was one holiday we would never forget.


Posted by Paper Architect at 2:05 AM