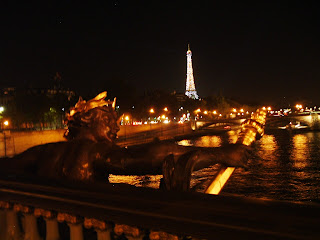 A CONFERENCE CALL has been set up for a presentation on our
travel program to Paris, FRANCE
September 28 - October 4, 2013

The group travel package is through GO  AHEAD  TOURS
with PAPER ARCHITECT as group coordinator.
There are currently 18 spots still available.
Check out pricing and information on our website:
http://paperarchitect.grouptoursite.com

And we will cover details for
the 4 day ART-TEA PARIS Walking Tour
directly through PAPER ARCHITECT.
https://www.paperarchitect.com/ART-TEA_PARIS_TOUR.php


There will be time for questions and instructions for registration.
The presentation will be approximately 90 minutes.

We will send back a confirmation email with call-in details,
travel package and walking tour information
for your review prior to the call.

Join us even if you just have an interest in visiting Paris
and see if this might be the type of tour for you!

As I was waiting for my luggage at the turnstile, I noticed a small suitcase that had stuff coming out of it. I thought, look at that piece of crap. Then it was painfully clear that piece of crap was mine. If I had taken a collapsable bag with wheels like I wanted I wouldn't have to go searching for a new suitcase. I hope I didn't lose anything out of it.

I love taking the shuttle from the airport. Both times I've taken it, I've been the last one to be dropped off which is perfect. I get a tour of different neighborhoods, check out where others stay and find places I put on my list to go as well as new ones to add to that list.

I'm staying my first night in a hotel on the rue Cler -- Rick Steve's favorite, Grand Hotel Leveque. Arrived there around 10am but I can't check in until 3pm. Left my bags in the storage room wishing I would have gotten lucky and checked in right away. Only having about 4 hours sleep over a 3 day period (counting time difference) I can barely keep my eyes open. So forced to occupy the next several hours, I asked the hotel clerk where was the nearest internet cafe and a place that sells luggage. The internet cafe was closed until noon so I scoped out the neighborhood. What a great area! It has everything and so convenient. Walked by the apartment I will be moving in tomorrow. If the outside is any indication of the inside, I will be in heaven. Trying not to have high expectations. . . tomorrow will tell.

To save time/$, I sat to write this at a cafe then stayed for lunch. At home, I don't buy bread unless I'm having company and rarely eat bread except at restaurants where it's fresh and hot. But my first bite into real French bread today and I can eat it all day. Great lunch. Wanted to keep the tradition and go to Laduree for lunch but not really dressed for it and not ready to tackle the metro. I think I'm a little hesitant because of getting mugged last time and I'm so tired I wouldn't be up to it.

Noticed in today's newspaper here that the US was the front page headline -- United States on state alert. If anyone has the time, please let me know what's going on. Sounds like Texas is the target.

Oh and thanks to all of you who sent me bon voyage wishes. Really was great to hear from you.
Posted by Paper Architect at 7:15 PM No comments:

or also known as Crêpe Day.

The Catholic holiday of Candlemas is a feast
to commemorate the purification of the Virgin Mary
and the presentation of baby Jesus.
In France, this holiday is called La Chandeleur,
Fête de la Lumière,
or jour des crêpes.

Not only do the French eat a lot of crêpes on Chandeleur, but they also do a bit of fortune telling while making them.
It is traditional to hold a coin in your writing hand and a crêpe pan in the other,
and flip the crêpe into the air.
If you manage to catch the crêpe in the pan,
your family will be prosperous
for the rest of the year.

There are all kinds of French proverbs and sayings for Chandeleur;
here are just a few.  Note the similarities to the Groundhog Day predictions made in the US and Canada. 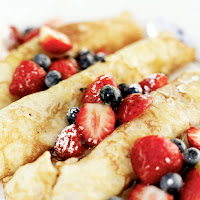 with a Group of Friends, Francophiles

Here is a fun way to celebrate Chandeleur - all you need are a crêpe recipe, ingredients, paper plates, and a small prize (such as a book or $5)

The crêpe-throwing game was kindly shared by its inventor, Ed Cepress, a French teacher at Totino-Grace High School in Fridley, Minnesota. Merci bien !

This info from Ask.com
Posted by Paper Architect at 4:00 AM No comments: